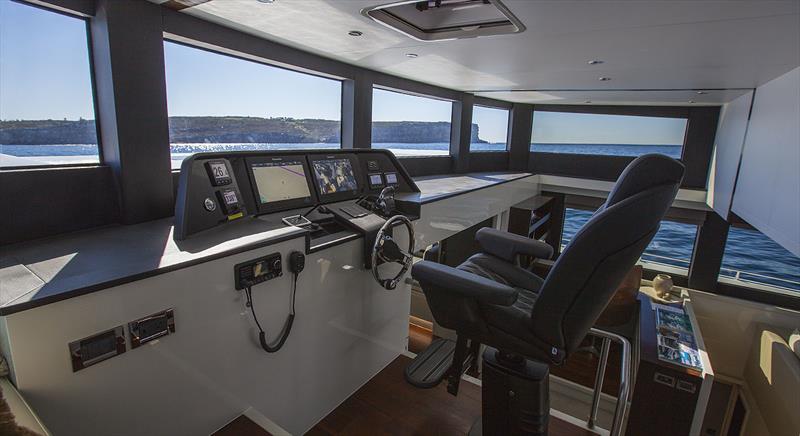 Clearly there were distinct notions of the famous M1 Abrams, courtesy of the forward only vision out of the bridge through a ‘slot’ type arrangement, as it were. You cannot see the bows, a term also used by tank commanders BTW, for the expansive coachhouse roof of what is the Owner’s Stateroom blocks them. Equally, looking out aft is absolutely precluded, given where you are, perched up on a mezzanine deck at the for’ard end of the main saloon.

Now the fact that she certainly weighs into the same class as the 50-tonne tank is about where all the comparisons end. She is not cramped, nor outrageously hot, and certainly not deafeningly noisy from the Honeywell gas turbine living there right with you in the same echo chamber. Best of all there is no stench from either petroleum based products, or far worse, expended rounds. Good, huh?! 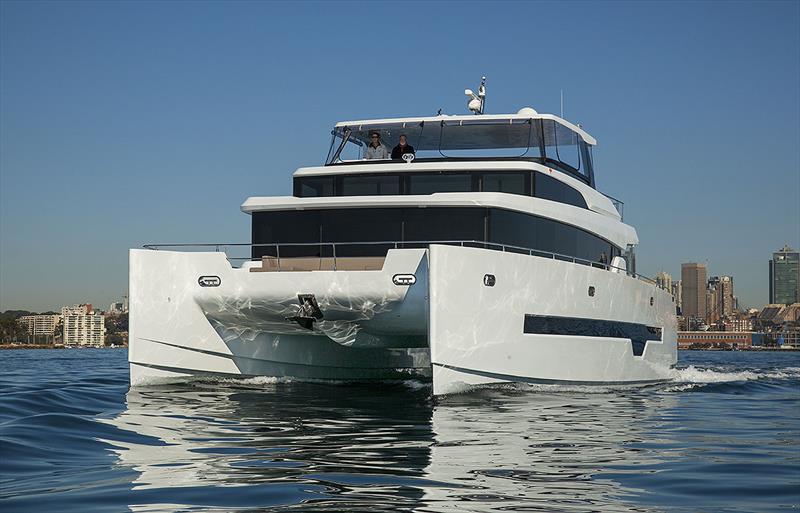 So what you do get, also immediately mind you, is a sense of just how magical a spot it will be for passage making, which is exactly its intended purpose. You even have a delightful lounge to port that will be the daybed par excellence as you go from here to there, with there being a long, long, long way off.

The reason is simple. You can have up to 4000nm of range. At a more sprightly 10 knots or so, you’ll be burning just 30l/hr, and chewing up 240nm days, and still be looking at an overall range of over 2000nm before having to bunker once more and fill her 7,600 litre tanks. And alas that’s what the ILIAD premise is all about. So QED right there. 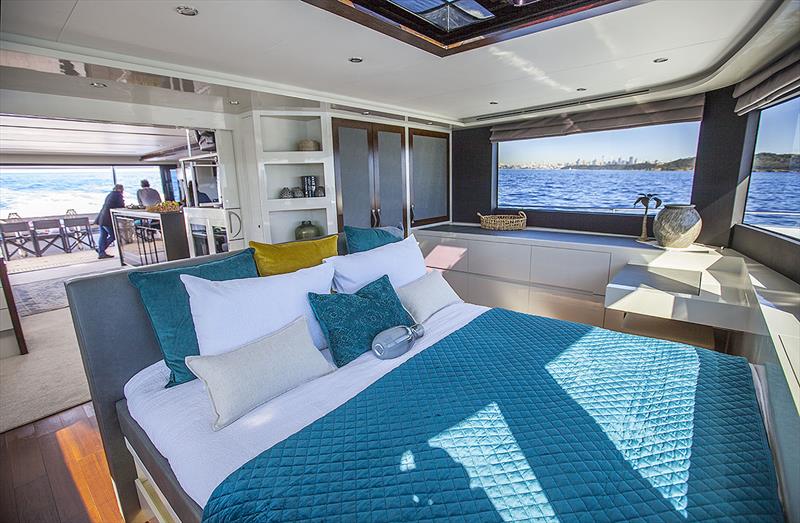 Of course, in more populated waters you’ll be helming from up on the flying bridge, with commanding views of all before you, and for that matter, all behind you as well. Should you have a cast of thousands on board, then at least half of them will be able to enjoy the bar, lounge, and conversation pit in close proximity to you. One or two could even score a great spot right beside you.

The mighty ILIAD 70 comes hot on the heels of her smaller sister, the ILIAD 50 that we reviewed in A boat of two hulls (and lives), just recently. She’s a vessel as effortless as she is imposing, rewarding as she is voluminous, and quite captivating, perhaps something akin to an opera singer. Think Montserrat Caballe…

As mentioned, the silent, long range running, along with the fully customisable solutions inside the existing hull and deck format, is really what the ILIAD brand has been built around. At displacement speeds, the whole experience is completely effortless. If ever there were an argument for buying a five million dollar passage-making vessel of stupendous proportions, then the ILIAD 70 would have to be it. Add in the economy we’ve already mentioned, and full vinylester resin infused hulls utilising 80-100kg/m3 mat, and you could pretty much end this report right here.

Yet that does not do a lot to describe this, Hull #1 of the series, or the brand itself. On the latter element, I sat down to ask Mark Elkington about ILIAD’s success. “There have been 11 ILIADs sold since our launch back at Sanctuary Cove. Six of them are 50s, three are 60s, and then there are two of these 70s, one of which we are enjoying here today. Our flagship 90 is still in the design phase, but it is coming along nicely.” 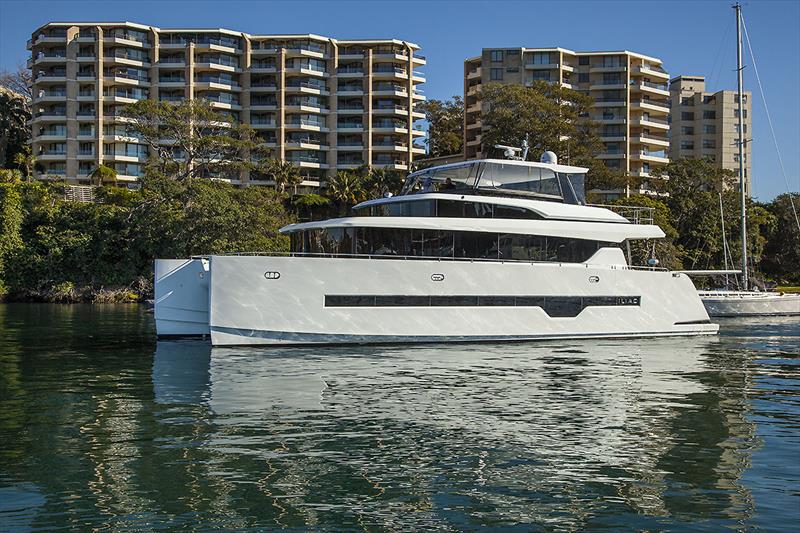 “Our target was to be selling 12 vessels per annum in three year’s time, so to be nearly there after just four months is terrific. The project was focussed on the Asia Pacific region for our initial units, before we then took on global demand, and this is still the case.”

“We can ramp up to meet demand now, and our contracted builder has a new facility that will come online for mid to late 2020. Stage one of that site was always there to accommodate the ILIAD target of 25 vessels, as we go from one a month, both stages of that project will take us to 25 craft a year. Everyone that has ordered now will get a boat by the end of 2020. The moulds for the 60 are ready, but that line will run into 2021, after first one is delivered in 2020.” 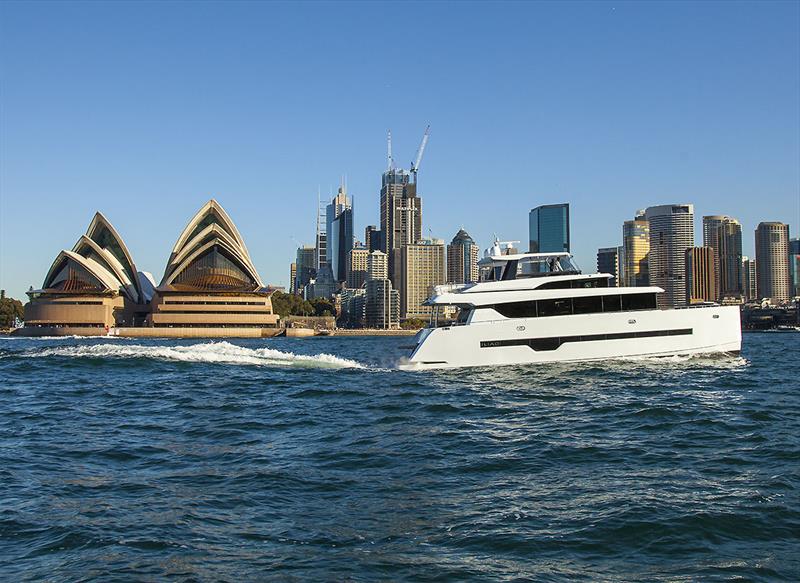 “We are happy at 25 boats a year. It suits our capacity, and also allows for that important ILIAD ingredient, customisation. We put in about 30 to 40% more labour to account for our client’s wishes”, said Elkington.

This is something you get to recognise on every ILIAD, but perhaps here in the 70, by virtue of its scale, you cannot ignore it. The five bathrooms have black stone that looks great, but is not the easiest to work with. You also get to choose what is normally an observation lounge and lower helm station as your Grand Stateroom, should you so wish. This means the mezzanine disappears, and that second tier of destroyer windows just fills the atrium with light. 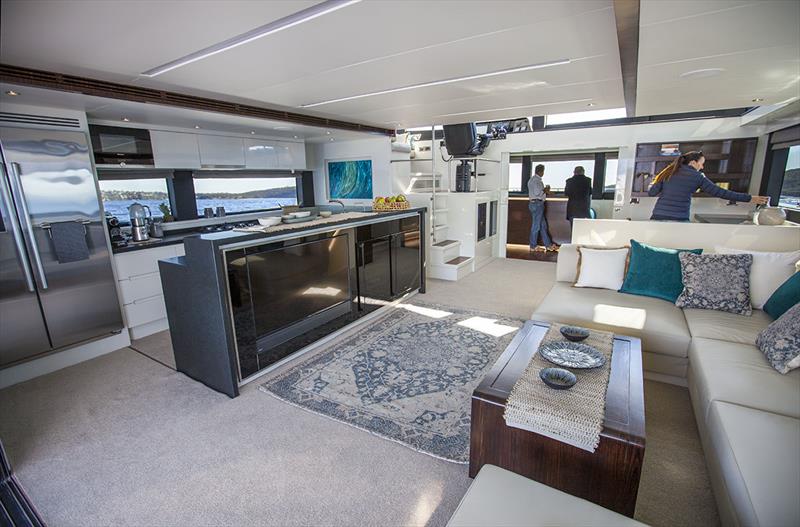 This one has four additional Staterooms and heads, with a laundry also in the starboard hull. There is a skipper/crew cabin in the port fo’castle, that can easily be a teenagers’ snug, and the starboard fo’castle is the owner’s head. The ILIAD 70 is certainly sumptuous, and the whole craft also offers that very rare quality on a boat – your own space and privacy. I think this is what I was most compelled by, from foredeck lounge, to party bar up top, or retreat into your cabin for maximum chill out.

Should you want others to join you, whom they’ll tell you are essential when you have this much magic on offer, then the galley will accommodate three chefs working away, and not offer any clashes. Toys, like various size tenders and road bikes can go up top, where a heavy-duty crane can ensure effortless remains the word of the day. If you’re an inside kind of person, then the whole lot can be enclosed and air-conditioned, so your room with a view can handle everything from the tropics to the Northwest Passage. 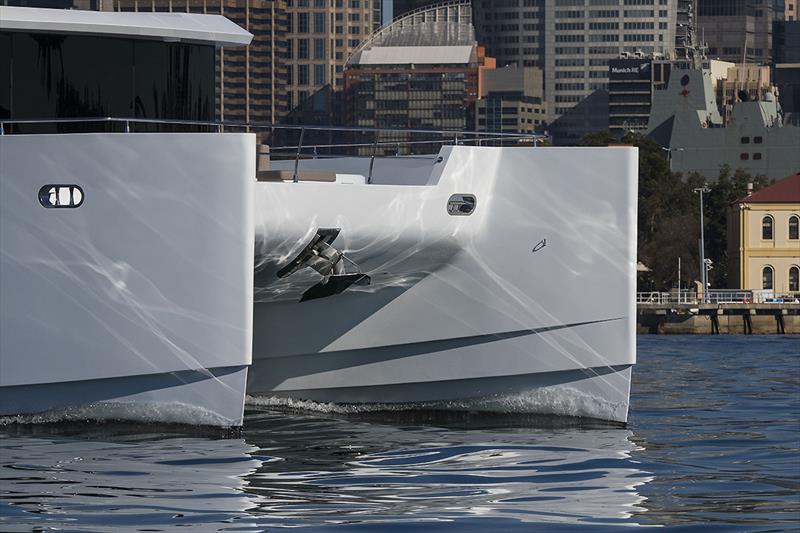 Talking of passage making, and it was clear that the owner of Hull #1 wanted to do long-distance cruising at around 10 knots, which is quite fast. Screw selection was critical to this, so as to get the best RPM out of the Volvo D11 725s driving the 59kg 740x750mm screws at the end of the inline shafts. The four-bladers are an alloy of copper, aluminium, manganese, iron, nickel, and zinc, with trace amounts of tin and lead.

It all means they are pushing the super efficient hulls with a minimum of fuss, which is why they can do it at 1200 RPM. This equates to the 30l/hr, combined, which for 60 tonnes wet ship is totally commendable. Given too that Hull #1 holds slightly less fuel at 6,700l overall due to client requirements, it is an important item to note. Another noteworthy aspect is that this ILIAD is insured with Pantaenius, not only because they can provide genuine offshore cover that can go around the globe with you, but because it is the most comprehensive, which is critical when you are talking about these sorts of sums. 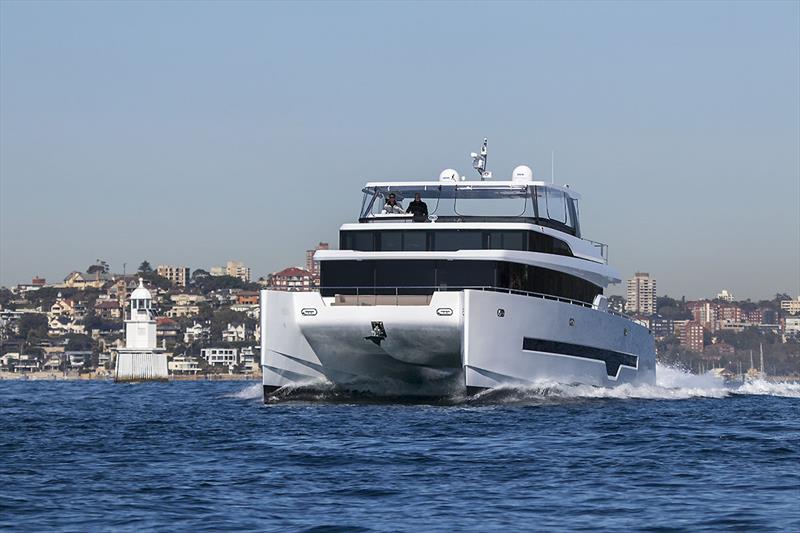 However, like everything, there is a trade off. The client did not want top end so much, so this boat does not offer as much of a dual purpose as the ILIAD 50 we tested. The whole equation and balance at something like 17 knots is just not there as it was with the very first ILIAD. She will go on to 21 knots, but it is all just information at that stage, as there is nothing at all to be gained up there, save for getting away from a storm, or something like that.

You know I reckon a pair of 10hp outboards would clip the ILIAD 70 along nicely in flat water, and with no breeze, for she is that slippery. Tank testing saw to that aspect, but as for my tip, well I think we can assume it is best left in the ‘don’t try this at home’ category.

Anyway, a change of screws will return the craft to her twin state of mind, but then at 10 knots you’ll do 38l/hr, so you can now see where the original statement came from. Still, it is very hard to argue with 30l/hr at almost 11 knots, as we have here, and provided that is where you are going with your boat. This ILIAD 70 also stands up magnificently against explorer craft with their single Diesels and 7, maybe 8-knot passage speed (or less for some).

Equally, I would have gone with underwater exhaust, for at the cruise speed the ILIAD 70 would have been almost electric. Between the double-glazing and the extra distance from helmer to engine room afforded by her increased LOA, peace may have found a new name. Equally, waterline exhausts burn the topsides on long runs. I mean you can have a funnel if that’s what you choose, but I reckon we have moved on from all of that… Still, it is what the customer wanted, and so the golden rule gets applied – happily. 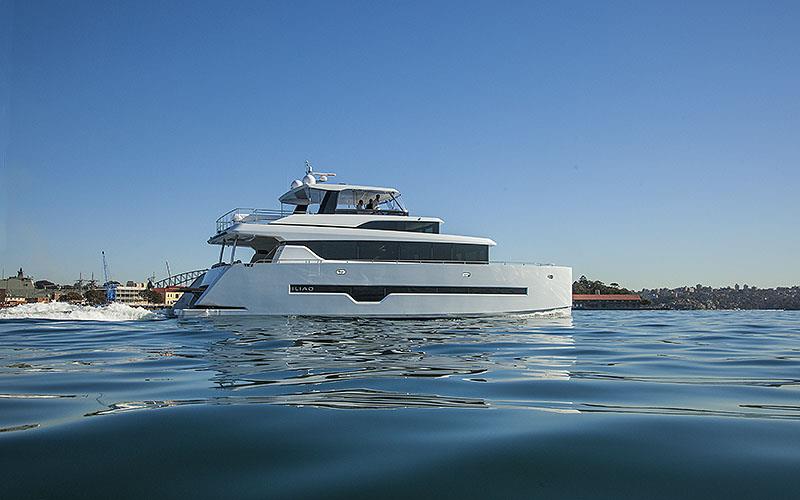 Ultimately, what you are left with is the sensational fit and finish, the ability to make it your own in whatever way you want, more than enough space for any ardent Trekkie to conduct a whole new series, along with some of the best style and grace going around in this very popular segment. The ILIAD 70 is also very price competitive when you consider all you get, and the fact that it would be a much larger monohull that can offer the same.

Applying the ‘would I have one’ test, you do feel very compelled because of all of the above, as well as shallow draft, meaning you can get into some terrific anchorages. I still think the hardest part of ownership would be telling all the people who would want to join you that you are full up. I guess you can contemplate that from some wonderful Pacific atoll, or see what might be written on the underside of your eyelids…

See the website for more, or call the team at Multihull Solutions on 1300 855 338 to see how an ILIAD powercat could take you off for the cruise of a lifetime.